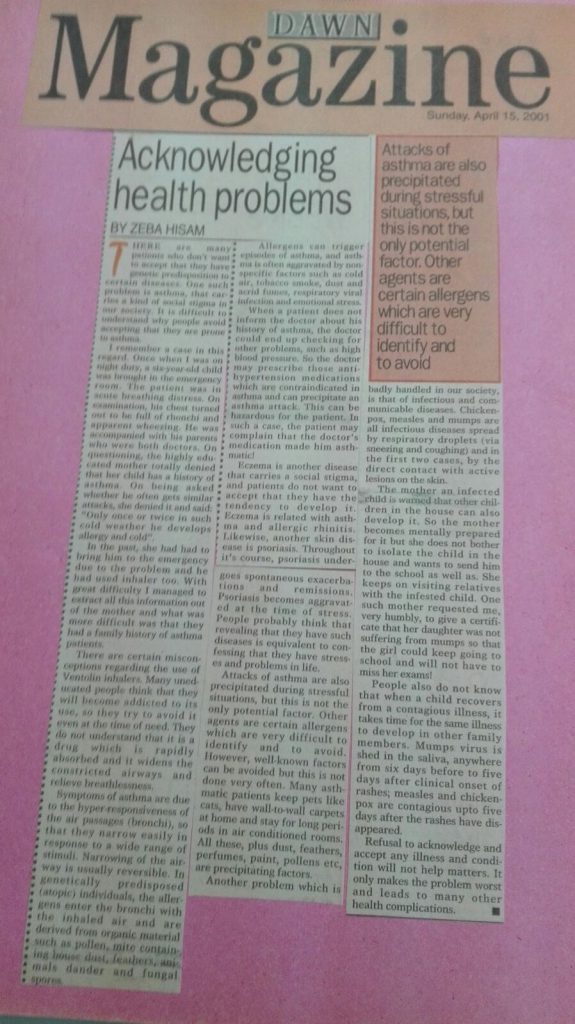 Dr. Zeba Hisam (Published in DAWN Magazine on Sunday April 15, 2001) There are many patients who don’t want to accept that they have genetic predisposition to certain diseases. One such problem is asthma that carries a kind of social stigma in our society. It is difficult to understand why people avoid accepting that they are prone to asthma. I remember a case in this regard. Once when I was on night duty, a six-year-old child was brought in the emergency room. The patient was in acute breathing distress. On examination, his chest turned out to be full of rhonchi and apparent wheezing. He was accompanied with his parents who were both doctors. On questioning, the highly educated mother totally denied that her child has a history of asthma. On being asked whether he often gets similar attacks, she denied it and said: “Only once or twice in such cold weather he develops allergy and cold”. In the past, she had to bring him to the emergency due to the problems and he had used inhaler too. With great difficulty I managed to extract all this information out of the mother and what was more difficult was that they had a family history of asthma patients. There are certain misconceptions regarding the use of Ventolin inhalers. Many uneducated people think that they will become addicted to its use, so they try to avoid it even at the time of need. They do not understand that it is a drug, which is rapidly absorbed, and it widens the constricted airways and relieve breathlessness. Symptoms of asthma are due to the hyper responsiveness of the air passages (bronchi), so that they narrow easily in response to a wide range of stimuli. Narrowing of the airway is usually reversible. In genetically predisposed (atopic) individuals, the allergens enter the bronchi with the inhaled air and are derived from organic material such as pollen, mite containing house dust, feathers, animal dander and fungal spores. Allergens can trigger episodes of asthma, and asthma is often aggravated by non-specific factors such as cold air, tobacco smoke, dust and acrid fumes, respiratory viral infection and emotional stress. When a patient does not inform the doctor about his history of asthma, the doctor could end up checking for other problems, such as high blood pressure. So the doctor may prescribe those anti hypertensive medications that are contraindicated in asthma and can precipitate an asthma attack. This can be hazardous for the patient. In such a case, the patient may complain that the doctor’s medication made him asthmatic! Eczema is another disease that carries a social stigma, and patients do not want to accept that they have the tendency to develop it. Eczema is related with asthma and allergic rhinitis. Likewise, another skin disease is psoriasis. Throughout its course, psoriasis undergoes spontaneous exacerbations and remissions. Psoriasis becomes aggravated at the time of stress. People probably think that revealing that they have such diseases is equivalent to confessing that they have stresses and problems in life. Attacks of asthma are also precipitated during stressful situations, but this is not the only potential factor. Other agents are certain allergens, which are very difficult to identify and to avoid. However, well known factors can be avoided but this is not done very often. Many asthmatic patients keep pets like cats, have wall-to-wall carpets at home and stay for long periods in air-conditioned rooms. All these, plus dust, feathers, perfumes, paint, pollen etc, are precipitating factors. Another problem that is badly handled in our society is that of infectious and communicable diseases. Chicken pox, measles and mumps are all infectious diseases spread by respiratory droplets (via sneezing and coughing) and in the first two cases, by the direct contact with active lesions on the skin. The mother of an infected child is warned that other children in the house can also develop it. So the mother becomes mentally prepared for it but she does not bother to isolate the child in the house and wants to send him to the school as well as. She keeps on visiting relatives with the infected child. One such mother requested me, very humbly, to give a certificate that her daughter was not suffering from mumps so that the girl could keep going to school and will not have to miss her exams! People also do not know that when a child recovers from a contagious illness, it takes time for the same illness to develop in other family members. Mumps virus is shed in the saliva, anywhere from six days before to five days after clinical onset of rashes; measles and chicken pox are contagious up to five days after the rashes have disappeared. Refusal to acknowledge and accept any illness and condition will not help matters. It only makes the problem worst and leads to many other health complications.